How to Delete Albums on iPhone – The Best Way

Here is the best way to quickly how to delete photo albums on iPhone!

The iPhone is the most popular camera in the world. But hardware too has to share the reason for this popularity with software. As part of iOS, there has always been the Photos app.

This article will explain how to delete an album on your iPhone or iPad if you have a lot of images on your phone and want to organize them and get rid of those albums you don’t need. The iPhone’s photographs app comes with a variety of pre-configured albums, but you can also create your personal albums on the device and give them any name you like.

The Photos app has been around since the first iPhone. And with the Photos app, a special place has been created on iPhone to save, browse, and organize your photos. The organization function includes sub-views of your photos in different albums – like Holiday 2021, Christmas 2015 and Fido’s first birthday.

But what if you want to delete an entire photo album? How you do that?

Luckily, it’s not that hard, and we’ll show you how to do it below. Here’s how do I delete an album on iPhone.

Deleting photo albums is relatively similar no matter what recent iOS you have installed. This guide is for iOS 14 , but they should be almost identical to what you do on iOS 13 and upcoming iOS 15 . 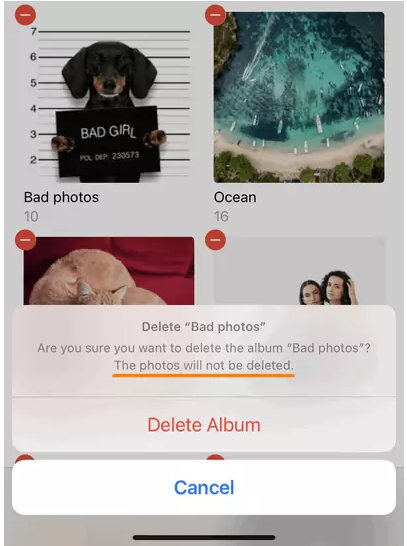 Note that deleting photo albums does not delete the images they contain. Also, there are some albums that you cannot delete. Here’s what you need to know:

When you create a photo album and select photos to insert, don’t move those photos from your main photo library or copy a new copy of the photo into the album you’re putting it in.

When you “place” a photo in an album, all you have to do is place a graphical link (a representation of the photo) in the album. Tapping it will open the photo from the main library where the real photo always lives.

This means that if you delete an entire photo album, you are not deleting the photos in it themselves. They only delete their organizational structure (the album). The original photos are still in your photo library.

Also note that some albums cannot be deleted. These are the common albums, such as Selfies, Screenshots, Recents, etc.

How to Delete Albums on iPhone

The good news is deleting photo album on iPhone is very easy. We will now walk you through:

And that’s it! You have now deleted a photo album on iPhone!